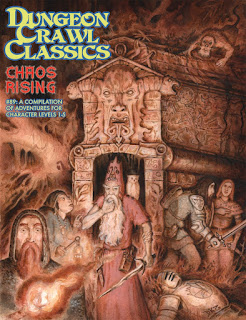 Every now and then a perplexed newbie appears on the DCC boards looking for guidance on the official adventures. Their confusion is unsurprising: not only the early DCC adventures were written for several game systems, but there are modules with fractional numbering, and unnumbered adventures hidden within other products. These are usually short sidequests, limited runs, or conversions of older D&D modules. Chaos Rising is a compilation of seven such adventures.

The booklet is 56 pages long and follows the iconic format of the current DCC line: eye-catching cardboard cover, sweet black and white interior, meticulously decorated maps, clear layout. I fell in love with their format the first time I got Doom of the Savage Kings in my hands, and consider it a gold standard for modules ever since. Inspired by Melan's post I checked if playtesters are credited, and I was glad to see that except for the last adventure they weren't forgotten.

The seven adventures within the booklet cover levels 1 to 5. They are all independent one shots that can be easily inserted into any campaign. Surprisingly there is no character funnel, and no level 4 adventure either. Let's see what else the book has to offer!

Elzemon and the Blood-Drinking Box

A level 1 adventure by Terry Olson, from the DCC RPG/Xcrawl Free RPG Day 2014 release. Elzemon the Quasit is bound by the wizard Nekros to guard and feed the titular box. He finds a hole in his contract, and convinces the wizard Rhalabhast that he really wants that box, so he should hire a bunch of ne'er-do-wells to steal it. If they fail, the demon had some entertainment. If they succeed, the demon will be free. It's a win-win situation for Elzemon - but not for the PCs. Obtaining the relic is no cakewalk: climb down the spiraling stairs for two days, get through an acid lake, find the entrance into the secret study under a pile of guano, then return to the surface with the box, which requires a healthy dose of lawful blood every day to keep its mysterious prisoner from escaping. In the meantime the group will be harassed by the sadistic quasit, colossal leeches, mongrel bats, and hairless vomiting cats that barf in the PC's mouth on a critical. Wicked! Then when the PCs think they can finally rest another NPC looking for the box is thrown in, and the players will have to decide whom they will piss off: a powerful wizard, or a whole church. It's a linear adventure, but it's full of delightfully fucked up ideas, and provides an ending ideal to become the starting point of a campaign.

A level 1 adventure by Daniel J. Bishop, from the DCC RPG/Xcrawl Free RPG Day 2013 release. Before the age of dinosaurs sentient sea scorpions called the Builders crafted imperishable bodies, but got trapped in them. Eons later Ivrian the sorceress found their secret, and tried to create an eternally youthful body for herself. She didn't succeed though, but managed to awaken the Builders, get killed, and become a ghost. Eventually her spirit managed to reach out to a blood realtive - one of the PCs, who is suddenly teleported along with his comrades to the cold mountains. After climbing the mountain and fighting savages the PCs can reach the old city, where Ivrian's ghost will ask them to finish the procedure she started. This will require the star stone held by a demon, who wants to be killed by the sword Nightraker, so he can leave this godforsaken place behind. Naturally the Builders will do their best to hinder the party by sending ectoplasmic filaments to stop the intruders. The rooms also hold natural gas traps, poison gas traps, and invincible ghost fishes. Despite its small size The Imperishable Sorceress offers a few loops, branches, and multiple endings. If the sorceress gets her body and Nightraker back she will turn against the PCs. It's also possible her relative realizes the true power of the star stone and usurps the imperishable body from of the sorceress. Of course the Builders can circumvent both plans. Once done or in need of escape, the players can do it through a tunneling metal mole, or a portal at the peak, where a stone circle has the exact ritual of creating imperishable bodies written on it. This adventure is a real can of worms that deserves to be opened. 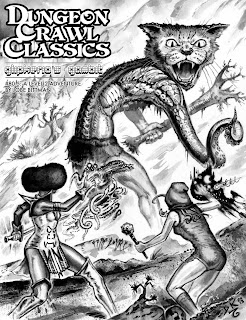 A level 2 adventure by Jobe Bittman, originally released as DCC #80.5. The party's wizard is visited by his patron(s) personally (The Three Fates as written, but can be easily changed to anyone else), who ask(s) him to clear out a temple invaded by the time traveling wizard Glipkerio, and his army of younger selves. As help the wizard is given a thread which makes him invisible to the forces of chaos, until the number 7 appears. The adventurers will have to ascend the mountain, where they will meet a cat-headed corrupt giant, wounded monks, stealing devilkin, hairy apes, and some evocative random encounters. After figuring out a puzzle the PCs will reach the temple grounds, which offer some more combat and exploration before the epic confrontation with all the Glipkerios hanging around. Some of them will travel back in time in the midst of the battle, and return later in a shape depending on what the PCs did to the wounded monks they've met during their ascent. At the end the elder Glipkerio turns into a cat-headed mutant giant, and travels to the past to stop the party. Glipkerio's Gambit is a fun and eventful one shot, albeit mighty linear. The premise is cool, the battles are interesting, the loot is good, and it has a simple, yet effective twist.

The Tower Out of Time

A level 2 adventure by Michael Curtis, originally released as DCC #77.5.  I have already bought this adventure last year on DriveThruRPG, and ran it in my D&D5e Wilderlands campaign. It's a trip to a primordial swamp, where the serpent-man wizard H'lisk sends a red beam from his tower to the sky. The beam is a homing beacon for the meteor that his master S'lissak used to travel the void. While it's incredibly linear, the scenery and the encounters are memorable - even disturbing, according to some of my players. The tower itself is an organic scaly structure, which holds spitting dinosaurs, antehumans controlled by cerebral leeches, prisons full of cavemen and rodents, giant trilobites, and the grotesque blood fueled flowerlike device which generates the red beam. There is a dangerous trap too, a simple puzzle, decent treasure, so all in all it's a well rounded little adventure with varied challenges. I'm a bit disappointed though, because the editor cut the patron Serbok out, who was included in the original release. It's a shame. If there is one thing DCC RPG needs it's more patrons.


The Jeweler That Dealt In Stardust

A level 3 adventure by Harley Stroh, from the Goodman Games Gen Con 2013 Program Book. It is a heist in the house of the fence Boss Ogo, who hasn't been seen since last month. Ogo isn't dead though: he got his hands on a gem that drove him crazy and turned him into a follower of Ygiiz, the Spider-Mother. He spent most of his time and money on his studies and managed to open a portal, thus drawing the minions of Ygiiz into our realm. The party is about to raid the place, knowing nothing about what's going on between its walls. They have plenty of room for planning, there are several ways to enter the house. Once they are inside they will face devious traps, fake traps, millions of harmless spiders, and a handful of demon spiders that have a devastating three step killer attack. Meanwhile Ogo is sitting in his room connected to the mystic gem, which keeps him alive, and makes him able to summon more demon spiders. There is a rival band too, waiting on the nearby rooftops for the PCs to exit the building with their loot. Besides the gem that drove Ogo crazy (if it survives the confrontation at all), and his remaining money, the adventurers can recover some stardust. Pressed into the skin the less fortunate take damage, while the others earn some luck at the cost of being constantly watched by the Spider-Mother. The stardust can be also fused into a larger crystal focus. Cool stuff! This adventure screams Lankhmar in every possible way, which is the highest praise a heist adventure can get. 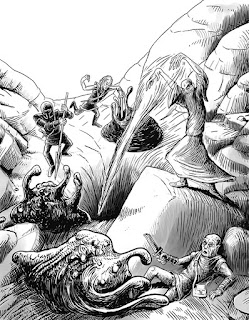 A level 5 adventure by Michael Curtis, also from the Goodman Games Gen Con 2013 Program Book. This is a wilderness adventure, with a map divided into squares of 15 minutes of riding. Once upon a time cultists managed to summon the Night Worm, an extraplanar beast that eats corruption. From then on they could experiment with black magic as much as they wanted without becoming freaks. One day a lawful order defeated the cult, but kept the worm alive for they thought it could be used for the lawful cause. In the end the order was destroyed by infighting for control over the worm, and the monster was left hungering under the shrine. The hook is very straightforward: someone from the party wants to get rid of his corruption and hears a rumor about the Night Worm. By the time party reaches the shrine a group of treasure hunters have accidentally released the giant worm, which is heading towards the nearest town, warping everything in its way. Following its trail the PCs can encounter ten foot long mutant catfishes, and an exhausted anchorite, and that's all... The adventure focuses heavily on the battle with the monster, with special emphasis on being devoured by the creature. The survivors earn no (or minimal) loot for their deed, but the memorable fight and the one time opportunity to cleanse someone is totally worth it. Curtis also deserves a huge pat on the back for including simple advice on handling haste and fly spells instead of saying "they don't work".

The Infernal Crucible of Sezrekan the Mad

A level 5 adventure by Harley Stroh, which was an example adventure in the first three printings of the DCC RPG rulebook. It was replaced by The Abbot of the Woods in the fourth printing, which I don't mind at all. Crucible promises to be an example of how high level a DCC RPG adventures should look like, but fails in this regard. The PCs are trapped in a three room laboratory that is built around a gimmick: one living creature must remain there. They will meet Elzemon the Quasit (a familiar face), some magical environmental effects, spell book eating glyph worms, mildly interesting loot, and an ape with a human brain. Not only there isn't much to do, but the adventure is also too wordy for what it offers. Surprisingly for a Stroh adventure this one is forgettable. Level 5 characters deserve something more epic than this.

In spite of my above complaints I like Chaos Rising a lot. It's jam-packed with intriguing adventures that require only minimal preparation, and don't take more than a session to finish. It's perfect for those times when the Judge is burned out, or only has free time while taking a dump. I hope Goodman Games will release another collection like this in the future - one hopefully less obsessed with wizards and climbing.

Tl;dr: While not without its fault, Chaos Rising is a juicy collection of short adventures that you won't regret buying. You can buy it on DriveThruRPG and in the Goodman Games Store.

Disclaimer: The DriveThruRPG links on this site are affiliate links. If you buy something through the link we'll get some credit for your purchase too.
Bejegyezte: Tamás Illés dátum: 15:34