Dark Souls and the Spirit of Old-School D&D

It seems my girlfriend is twice the man I am: a few weeks ago she finished Dark Souls. In case you were living under a rock and never heard about it, Dark Souls is a cruel japanese dark fantasy rpg where you will die a lot, usually because you suck at combat or you are careless. It's a game I adore, but never started playing seriously because it needs a lot of time, patience, and endurance. I usually lack all three of them nowadays.

But why is Dark Souls so interesting for a Dungeons & Dragons fan? Because the game cannot deny the influence of old-school D&D. Dark Souls is full of spells, items, monsters, game mechanics, and design principles a grognard will be familiar with  - even if some of them are hard to recognise thanks to weird twists and changes to the well known formula. Let's take a look at some of the most interesting and less obvious ones I've found so far. I'll leave out trivialities like "you can be a wizard Harry!", "OMG it has fireballz!", and "you can slay giant rats!" Those are pretty common fantasy clichés no one will be surprised to see in a crpg.

Experience for Gold: In D&D gold and experience are the two main resources needed for advancement. Interestingly in classic D&D most of the experience is awarded for the treasure the player character brings up from below, which makes XP seem a bit redundant. Dark Souls merges GP and XP into a single currency: souls, which are used both for payment and advancement. You can earn souls for defeating enemies, or you can find then as item, which esentially replaces the gemstones and jewelry of D&D. In Dark Souls your character and most NPCs are undead and demons, so it's fitting they use souls to trade and gain power. This is an amazing example about how you can make some weird game mechanic make sense in your setting.

Death Penalty: Every death means losing some progress in old-school D&D. While in Dark Souls you won't lose levels on death, you will lose all your unused souls and respawn at a bonfire. You can recover your dropped souls, but you have to be careful, because if you die again your previously lost souls will disappear. I've seen people lose souls enough for multiple level ups thanks to stupid mistakes.

Importance of Player Skill: Classic D&D puts a huge emphasis on player knowledge and skill. So does Dark Souls. Death is a harsh lesson. If you want to advance you have to learn from your errors. While good luck, improved stats, and quick reflexes are helpful, knowing the attack patterns of monsters, the signs of traps, or the small difference between normal chests and mimics is what will make the real difference between a successful and a bad player.

Familiar Monsters: Even if you ignore classic fantasy tropes like giant rats, giant spiders, dragons, undead, chimeras, hydras, hellhounds, snakemen, etc, you'll still find enemies that feel like gigerian reimaginations of Monster Manual entries. Mimics, myconids, slimes are no-brainers. Pisacas remind me of gricks. Phalanxes are lemures with spears and shields. Chaos Eaters are the nightmarish children of xorns and rust monsters. Chaos Witch Queelag is Lolth. The predecessor Demon's Souls had mind flayers. And there are probably more I didn't notice, yet.

Historical Arms: Unlike most crpgs nowadays Dark Souls has polearms, and they are downright awesome! Speaking of polearms, I've always found it strange how specific Gygax was with their names in AD&D while using only generic terms for the most iconic weapons of fantasy fiction: swords. Thankfully the developers of Dark Souls weren't so ignorant! Besides the generic swords you'll find Estocs, Claymores, Flamberges, Zweihanders, Iaitos, Uchigatanas on your adventures.

Weapons vs Armor: Do you remember AD&D 1st edition's unwieldy Armor Class Adjustement section of the weapon table? The game has something similar with different armor offering different amounts of protection versus each damage type. If you know what you're going to face it might be a good idea to dress and arm yourself for the occasion - unless you are one of those who like dodging around naked or attacking from distance.

Megadungeon: I've left the most important to the end. Dark Souls' Lordran is a colorful and
immense dungeon with multiple levels. The protagonist's journey goes through monumental castles, moldy catacombs, sparkling crystal caverns, fiery hellpits, gloomy forests, and even abstract places like a city in the past, or a world inside an ancient painting. These areas are not only huge, but they are full of secrets, loops, branches. They are also interconnected, thus the game is everything but linear. To make things even more complicated there are covenants you can join for different benefits and a few memorable NPCs who are far from static shopkeepers and questgivers: they have their own stories, they have goals, and your deeds will influence how they behave with you and even each other, which makes Dark Souls' environment feel alive.

A few years ago I thought Dark Souls was just a grim hack & slash for masochists, but after trying it myself and seeing the adventures of the Chosen Undead I had to realize how close it is to old-school dungeon crawls and roguelikes. It is a game worthy of sinking a good hundred hours into it. Unfortunately before I can do that I'll have to finish like a dozen other games. But who knows, maybe once I'm retired I'll be able to start my journey through the land of the Ancient Lords!
Bejegyezte: Tamás Illés dátum: 17:57 No comments: 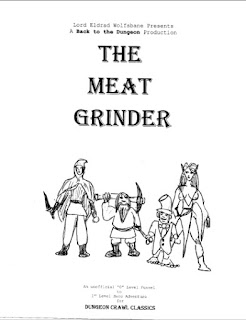 When I started the hobby I was a broke kid. I was glad when I could spare some money to buy a rulebook, so I didn't understand who the hell buys modules which were usually short and expensive. During my first ten years as a Game Master I've only bought a single adventure collection, which was written for a hungarian rpg best forgotten. I've found it on the shelves of an antiquary. It was dirt cheap, and I've had an urge to buy something. Those adventures were so shitty I couldn't even finish reading any of them, and I had absolutely no idea how to run them. All these lead to me ignoring modules for many years.

Of course as I grew up this attitude changed. With more money and less free time I learned to appreciate modules. I prefer short, straightforward, imaginative adventures, but I'm usually happy if two of these conditions are met. My favorites are Judges Guilds classics and the current run of DCC modules. Still, I usually just steal ideas from them. It's very rare when I find a module I want to run as written.

The Meat Grinder is such an adventure.

I discovered this beauty while browsing the Goodman Games forums.

"A FREE Zine Module for DCC!
In the 1970s ZINE Style!
Completely unprofessional!
A Level "0" Funnel that brings one to 1st level!
Make many stacks of "0" Level characters!
Various spots where prisoners are found to replace the dead!"

I love character funnels! Some of the most fun adventures I've ever run were funnels. Not only they are often crazier than your average dungeon crawl, but they also produce far more casualties, yet somehow the sessions are more light hearted than usual. I've yet to see a player who was mad because of character death during a funnel, or one that didn't have a satisfied grin on his face when at the end he could level up his survivors to first level. It feels like a great achievement, a proof of the player's cunning and luck - even if he lost three or more characters by the end.

The author wasn't lying about 1970s style. The art and the layout is so bad and childish that I fell in love with it at first sight. What this booklet lacks in skill, it makes up for in mood. It has illustrations of goatmen (cool!), goatmen murdering people (wicked!), the graet pig man beast (awesome!), and a demon I could hardly imagine without the illustration (crazy!). It also has a map in the middle which mimics the DCC style by filling the whitespace with art. It's amazing! You'll know at first glance which room is which even without turning the page to its description! Kewl stuff so far!

The writing is just as amateurish and unprofesionnal as the art, which makes it already miles better than what professional publishers produce. It's not bland and neutral, it has the excited voice and attitude of a teenager writing up his first adventure. It feels like listening to one of your nerd friends who can't shut the fuck up about how he has slain a demon lord with his level 100 infernal paladin/wizard/assassin last night or how he is going to kill all the PCs in his next adventure. But it's not annoying! It's goddamn evocative. It gets you in the mood of running this shit! After reading the hook you'll want to murder the goatmen for what they did. After reading the way to the dungeon you want to visit all those cool sounding places the text mentions. After reading a room's description you want to send your players there and see how they die. Heck, I would actually visit them myself to die!

After the introductory massacre the rest of the adventure takes place in the disguisting demonic dungeon of the loathsome beastmen. It's a hostile environment with evil altars, piles of corpses, meat grinders, a rusty pit above pool of acid... Yeah, the pool is a quite obvious trap, and it's not the only one - the players can get killed by energy blasts and toxic gas too. The adventurers will be glad to leave this place behind once they finish their quest.

Mosts of the monsters are goatmen, who attack in large numbers and are wicked bastards that like cooking people alive or raising them as zombies. The players won't feel sorry for killing them. There are far more interesting inhabitants though! Their leader is the GREAT PIG MAN BEAST who will hack survivors to pieces with his cleaver. They have a summoner who sacrifices a small girl to summon a demon. There is a pig polymorphed into a dragon. I still smile when I think about the last one.

After all this awesomeness the treasures are surprisingly generic: mostly gold and gems, The only interesting item is the magic sword of the zombie knight, which is a +1 sentient longsword that wants to punish murderers and can detect sloping passages. I almost wrote intelligent instead of sentient, but he's actually quite stupid (Int 3).

I will have to fix my earlier statement. I don't want to run this adventure. I want to get drunk to forget what I've read, then play this adventure, then finally run it for my party! I'm also in the mood to draw my dungeon on paper with pen again, to do shitty little illustrations around them, and use courier font for my notes. I also want to see Porttown and all the places mentioned in the module. These twelve pages made me happier and more excited than anything done by professional publishers this year. I don't know who wrote is (I do have a guess), but I'll buy him a beer one day.

Update #2: Thanks to the generosity of Eldrad Wolfsbane the original links are public again.
Bejegyezte: Tamás Illés dátum: 15:07 5 comments: