Review: The Meat Grinder Too 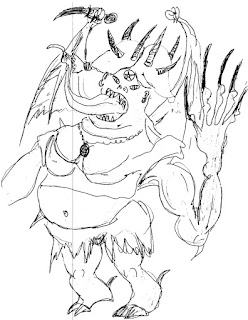 Well, that was quick! But is it a good idea to release a sequel so soon for such a masterpiece as The Meat Grinder? We haven't even digested the first one, we haven't finished appreciating it. It was so good that the expectations are higher than Mount Everest. Will The Meat Grinder Too deliver too?

The art follows the same cheap retro style as the previous adventure. You'll get the ugliest demon woman and old man you've ever seen, and lots of fish men. The dungeon map is just as neat and useful too as before.

The story follows the events of The Meat Grinder. The party arrives in Porttown to rest and level up. Porttown is a dirty shithole razed to the ground. The town's description is very short: you get the name and picture of the twelve places you can visit. While it pains me that there's nothing about the Keep of the Unseen Lord or the Wizard's Tower, the info given is more than enough for the Judge to start the new adventure. Onward, to the River Rat tavern!

The locals honor their heroes with a huge celebration in the tavern. There is massive party with more than fifty people and lots of scantily clad maidens, just as it should be in a kickass sword & sorcery adventure! Then the demon bitch shows up with the heads of the murdered children on a plate, throws it in the mass, and everything gets bloody depressing grimdark. That's what I loved about the first one: no dicking around with pretentious hooks, the party is thrown into the adventure in the blink of an eye and once they realized what's happening there is no turning back! The demon woman encounter is freaking amazing by the way, her abilities reminded me a of Evil Dead II's granny on steroids.

It's a pity that the wicked introduction is followed by a sluggish part where the brooding NPCs tell the backstory and are arguing with each other. It's not long at all, the dialoge is entertaining, but it suddenly halts the momentum the beginning had. Also, playing arguing NPCs as a Judge feels weird. It's like arguing with myself.

Fortunately the dungeon and its environment compensates for the break. The coastal area around the dungeon is already disconcerting, with stormy weather, screeching black birds, shipwrecks. Then the party stumbles upon the entrance which has rusty faces on it that will laugh for days after their monologues. Sweet!

The lair is inhabited by fish men who like torturing, sacrificing, and impregnating shipwreck survivors. Like the beast men from the earlier adventure, they are abominations the players will hate. They aren't the only foes here though. The Fish King is a small dragon that breathes sleeping gas and can teleport. He likes keeping his hybrid wenches around. There is a demon with unpronouncable name that looks like a whirl of duest, eyes, mouth, and teeth. Its bite will make worms burrow into the victim's flesh. How awesome is that? The White Lady resides here too, who is a creepy undead that drains strength - a sure deathtrap for juvenile players whose characters are just as horny as their creators and try to fuck every female NPC.

The rooms aren't boring either. You get torture chambers, a sacrificial temple with prisons, room full of pits, statues shooting death rays, another meat grinder, and of course treasures! Besides the usual coins (which are given exact amounts again, a nice old-school touch) there are two magic items, which have unique backgrounds that don't mean much but do sound so cool that the players will surely keep them even if they find better items over time. Heck, they sound so cool that after reading about the trivilium wars and Hargemel the Demon Wizard I feel an urge to learn more about them!

You probably won't relive the wonder of the first one, since it's still a fresh experience, but the that won't make the sequel any less an inspiring. The more time I spend reading it, the more I want to run it. Eldrad Wolfsbane understands what makes ugly retro fanzines tick. Unlike most contemporary trash this adventure has a heart - a deviously evil, black one. You can download it HERE.

Update #2: Thanks to the generosity of Eldrad Wolfsbane the original links are public again.
Bejegyezte: Tamás Illés dátum: 10:51 No comments: