Those who have follow this blog probably know that I like tinkering with character sheets. If you like fancy and decorative sheets, then these aren't the ones you are looking for - I prefer a minimalistic and printer friendly design and cramming as much useful information needed on the sheet as possible. For a long time I have been using Inkscape to make character sheets, but its a vector graphics editor first and foremost, and its limitations slowly started to become annoying.

Last year I bought the desktop publishing application Affinity Publisher on a sale, and never looked back.  Its dirt cheap compared to InDesign and other professional applications, it is far user friendlier than Scribus, and you have to buy it only once. I learned its basics while tinkering with Hecatomb's layout, so even if that projects remains abandoned, at least the time spent on it didn't go to waste.

While re-reading OpenQuest 3e recently I felt an urge to fuck around a bit again with Affinity Publisher, and I ended up retooling one of my character sheets for the game. Newt gave his blessing, so here you are, download and have fun! C&C welcome. Stay tuned for more, as form-fillable versions are coming soon.

Update #1: I added the Affinity Publisher templates to the links.

I have been in the mood of rolling some percentile dice for a few years now. Unfortunately I did not have any chance to run any game from my small but vicious collection of Chaosium games and their relatives, and Hecatomb1 had to be put on hold due to lack of time and brain capacity. At least I was lucky enough to play a few one shots of Call of Cthulhu 7e as a fat and fast-talking archeologist professor Jacob Smith.2

Just like Dungeons & Dragons, Chaosium's games are also having a renaissance. Unlike Wizards of the Coast, Chaosium has been putting some serious effort in keeping even their classics alive. Their RuneQuest Classic is one of the most cherished books on my shelf, so it was a no-brainer for me when their Call of Cthulhu Classic boxed set's Kickstarter was announced, that I will dish out some serious cash on that. Originally I wanted to get the classic one inch box, considering my firstborn was on the way, but then I changed my mind when I imagined him looking in my eyes a decade or two later and calling me an idiot for not buying the majestic $100 set that will probably worth a small fortune when I perish.

It was a long and slightly bumpy ride, my patience growing thin as the boxed set kept getting delayed due to various global crises. Today though the wait has come to an end when I found a thick and heavy box from Poland lying on my office desk. With eyes gleaming from excitement I borrowed my collegue's kampfmesser to tear it open. When I finally shoved away some of the packaging material I hesitated, but in the end gave up on sacrificing said collegue to the Old Ones - though the urge was hard to resist.

The two inch boxed set contains enough material to play Call of Cthulhu for a lifetime. Its contents include:

I would have been happier if some of the handouts and the GM screen were printed on sturdier paper, but I'm also pretty fucking satisfied with the quality of the poster maps. It's a pity though, that the 1981 Chaosium Games Catalog and the original Basic Role-Playing rulebook were only included as pdfs. The rulebooks and modules are softcover, saddle-stitched, just like in days of yore, though they probably have more hit points than the originals. Overall I'm very satisfied with the contents. All it is missing is Masks of Nyarlathotep, and it would be perfect. Dear Chaosium, please do an expanded QuestWorld boxed set next!
To finish this blogpost off, some shitty pictures of the contents hastily made on my desk follow... If you need more pictures of anything specific, feel free to ask, and I will do my best to take a photo of it. 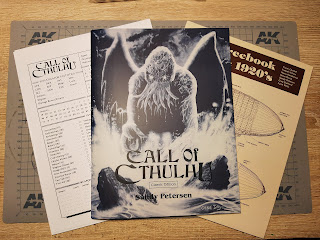 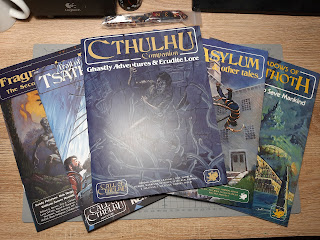 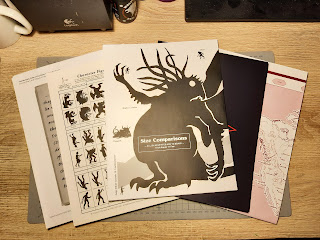 1 By the end of summer I had a pretty neat player's rulebook of some 30 pages, but endless rules revisions, my firstborn, and work interfered and I lost my will to continue with it. Plus there are a crapton of percentile games out there already, so I might end up just house ruling one of them and using the setting when I finally rise from my ashes as a Referee.
2 He looks basically like Jack Black's character from Jumanji: Welcome to the Jungle. He kinda acts like that too until there is some action, when he kicks ass. Not the most original character, but I enjoy playing him.
Bejegyezte: Tamás Illés dátum: 20:31 No comments: