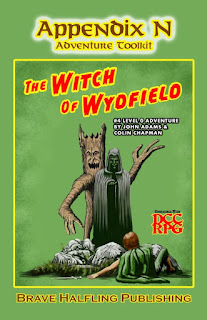 The Witch of Wydfield is the fourth, and so far final part of Brave Halfling Publishing's Appendix N Adventures Toolkit line. It was meant to be a Kickstarter exclusive bonus never to be released anywhere else. It's $1.95 on DriveThruRPG at the moment. Just as The Crumbling Tower, and Danger in the Sulyndri Forest were replaced by The Vile Worm, and The Treacherous Cobtraps, so did The Witch of Wydfield take the place of The Revenge of Abudakar in the line. No idea if we'll ever seee any of these lost adventures, or what's going on with remaining rewards, like the Appendix N Adventvetures Game Box, Perplexing Disappearances in Brambury, the Old Isle campaign setting, the pantheon, or the character classes.

The Witch of Wydfield is a short character funnel. No idea for how many PCs it was written, as it's never mentioned anywhere. The module has the usual Mark Allen map, an ugly cover unrelated to the actual contents within, and a few nice illustrations inside. According the highlights after investigating a local tragedy the PCs will go to the forest to face a witch and her minions. This is followed by a detailed description of how the hag was murdered by the village cleric, how she possessed a local girl's body, and took revenge.

The investigation is bullshit. There is a lame clue written by the cleric on the wall with her own blood, but the villagers have already figured its meaning out during the introduction. Thank god for well educated peasants! They will even tell where the witch is hiding, so the players won't have to waste their time on learning trivia they wouldn't know about. This leads us to the other issue with the complex background.  The module assumes the party knows what's going on in the village, and who is who. Guess what: this is the first session with an in medias res opening. Unless the Judge spent some time introducing the place, the players won't have a clue about the local history, who the murdered cleric was, and why should they care more about the possessed girl than any other faceless NPC. With a proper prelude the events could have served as a strong and motivating hook, but as written it just falls flat.

There are three areas to explore. Outside the ivy-clad house the PCs will be harassed by a hexed hunter. The text says he will fire at spell casters first, which is a pointless piece of information, since level zero characters don't cast spells yet. Is this a conversion, or is the author unfamiliar with DCC RPG? Closer to the house the animated ivy will attack too. Once inside the characters will face the primeval slime bubbling in the cauldron, and can loot some money, a demon statuette, and a few potions. They can advance further through a trapdoor which can be noticed by a DC 5 Int check. Seriously, why did anyone even bother to come up with a DC to this? In the cellar there is an alarm spell and a floor that will hinder the characters for 7-10 rounds. It's a meaningless trap, because the hindrance won't have any consequences: the stage is already set for the finale, there is no timer to battle against. At the end our brave villagers will meet the possessed girl and a soul draining demon. There are three possible outcomes, all of which lack any kind of impact for reasons already mentioned above. For surviving this mess the players will be rewarded with a magic broom, and an either unconscious, or dead girl.

My usual complaints about bland writing and easy battles for ANAT modules stands true for The Witch of Wydfield too. The lack of atmosphere becomes even more apparent after reading They All Burn Down Here, which is also a funnel about witch hunting, but manages to pack a solid punch with less page count. Is there anything worth salvaging here at all? Yes, there are some cool ideas that need better presentation - like the animated ivy, the cauldron-dwelling slime, or the final battle with the soul draining demon. Make these encounters more challenging, add a grim horroristic tone the adventure, and start messing with the PCs. If you don't have any ideas, then watch some horror movies, like The Blair Witch Project. Still, adventure modules are supposed to inspire and make preparation easier. This one fails in both regards, so you're better off creating a new one from scratch than buying this.

Tl;dr: The Witch of Wydfield proves that you can write a bland adventure about witch hunting in a deep dark forest. You can buy it on DriveThruRPG.

Disclaimer: The DriveThruRPG links on this site are affiliate links. If you buy something through the link we'll get some credit for your purchase too.
Bejegyezte: Tamás Illés dátum: 13:55 No comments: