The End is Nigh!

Well, at least for 2016 in my time zone... It has been an interesting and eventful year for me, but I'm not going to waste anyone's time with retrospects and boring lists. Since the reboot the blog's page views were steadily growing with each post, which was a very uplifting experience. I want to say a huge thank you for all Vorpal Mace readers. I promise I'll keep delivering reviews in 2017, and since I'm going to start a few new campaigns next year that will mostly use stuff of my own creation, be prepared for some gaming material you can actually use. Happy New Year!
Bejegyezte: Tamás Illés dátum: 17:15 No comments: 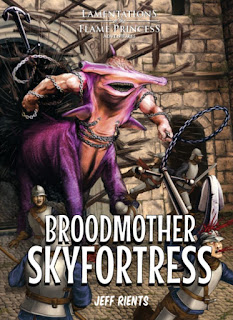 Holy fucking shit! I have totally forgotten about this! Broodmother Skyfortress was one of the many concurrent indiegogo campaigns Raggi ran as an experiment more than four years ago. From around two dozen campaigns only four got funded. Many considered this  whole affair a failure and forgot about it - including me. No wonder I was surprised when a few weeks ago the release of BMSF was announced.

Broodmother was written by Jeff Rients, who is one of my all-time favorite OSR bloggers. While others were busy rambling about how thieves ruined D&D, admiring obscure rules from the DMG no one ever used, or having dick measuring contest about who is the grognardest of all, Rients let his imagination run wild in fun and evocative articles. I'm not saying he didn't have some tedious posts about things I couldn't care less about, but I've found him to be far more entertaining and helpful than others. Thus my expectations were high.

Those who supported the indiegogo campaign didn't exactly get what they were initially promised, and I'm sure none of them will complain about that. Instead of a 32 page digest-sized module LotFP published a 170 page booklet that's full of DM advice and Jeff's best posts besides the adventure. That's what I call overdelivering!

Before delving into the contents I have to halt for a bit to praise Ian MacLean's brilliant art. Just take a look at the cover! It's a huge ass elephant-shark hybrid bursting through a door to slaughter soldiers with an anchor. It looks wicked cool. It makes me want to read it. It makes me want to run it even before reading a single word. The interior art is just as good as the cover. It's full of energetic comic style illustrations about these ugly bastards ruining iconic stuff, adventurers getting the short end, and the author doing all kinds of silly things. My favorite is the homage to a classic Exalted cover, which will make your eyes bleed. The adventure is accompanied by two maps, which besides showing the cartography have the random encounter charts on them. It's as useful as it sounds: incredibly.

The book is anything but boring. Jeff's conversational voice will grab your attention right from the first sentence, and take you on a journey where he introduces every aspect of DM-ing. The titular adventure about big weird monsters isn't your usual dungeon with keyed rooms, it's an example Jeff uses to show you how to write a kickass adventure. He will analyse every aspect of his work, reveal the reasons behind his decisions, and then give excellent advice about running and customizing it.

Jeff starts this by showing you how to incorporate BMSF it to your campaign, come to terms with it wrecking your setting, get your players motivated to visit the godforsaken place, and start a new campaign if you don't have one already. By the time reach the cast of antagonists you will be already pumped to run this!

If it wasn't clear from the covers, the monstrosities of BMSF aren't your usual D&D giants. They are wicked barbaric beasts that spend their time with operating the sky fortress, raiding settlements, leaving their eggs behind, and doing all kinds of disgusting things. They are godlike, and to illustrate it, Jeff uses a cool mechanic that will surely piss of some grognards: they don't have any AC value, because they are so big you can't miss them, but they have 5 points of damage resistance. With their shitton of hit points it's obvious that battling them is suicide.

There are seven giants, each of them with its own personality, agenda, and disgusting habits. Their rendition is straightforward about what's important, and vague about the small details. What are the tits of the Broodmother like? How are the Terrible Twins conjoined? Who are these giants? Who built the floating castle? Who are the wretches living underneath? You don't get exact answers. Instead, you get options that you can choose from, or completely ignore. Inspiration over instructions. I love it. Thanks to these holes the adventure will need some work before running it, but not too much, and gives you enough help to get it done quickly.

The dungeon has 28 keyed sites, and can be divided into three major sections. The sky fortress is where the giants live their lives and keep the fortress afloat. The surrounding clouds are full of ruins left behind by the original builders. The tunnels below are the home of primitive humans stuck here generations ago. The players can also meet spider swarms, hatchlings, spectral malevolences conjured from an angry dead god's brain, but they will probably have more problems with the enviroment than its inhabitants. There are plenty of objects to interact with, but being careless will have dire consequences. Foolhardy players can quickly turn the exploration into a crazy escape mission in several ways - including tampering with the skydrive, turning off the golden obelisk that serves as lightning conductor, and reviving the dead god that kills 1d6 creatures every turn. Such extraordinary place has extraordinary loot too, but their value is not always apparent.

The second half of the book is a collection of Jeff's best articles, including classics like Carousing, The Living Dungeon, EXPloration, How To Awesome-Up Your Players. Some had minor updates, but they are basically the same articles you can find on his blog. At the end there is an appendix with monster and magic item stats for 3e/Pathfinder fans. It's a nice touch, although whoever converted the monsters forgot to take into account the higher damage values 3e/Pathfinder characters. To achieve the same shock and horror that the giants can have in LotFP I recommend at least doubling the DR values.

BMSF is a module that was worth waiting for. For your money you get a kickass adventure, and some of the best advice the OSR ever provided. This is the magnum opus of Jeff Rients. While I can't imagine he could ever produce anything better than this, I sure hope this isn't the last time we've seen his work published.

Tl;dr: Instant classic. You can buy it on DriveThruRPG and in the LotFP store.

Disclaimer: The DriveThruRPG links on this site are affiliate links. If you buy something through the link we'll get some credit for your purchase too.
Bejegyezte: Tamás Illés dátum: 20:38 1 comment: