Review: They All Burn Down Here 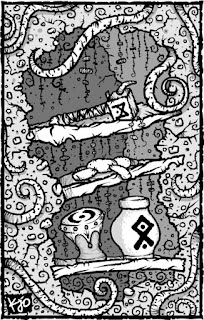 After the last two Appendix N Adventures Toolkit reviews it might seem that I don't like short adventures. Quite the contrary! I have written plenty of them too for my campaigns - they are ideal for short sessions and filling the empty spots in a sandbox. What I'm against are lengthy descriptions without meaningful content. An adventure's text should be straightforward, evocative, useful. A mini-adventure with three rooms ideally shouldn't take more than one to three pages - map included. They All Burn Down Here by Kevin Anderson is an exemplar of doing it right.

This module is a short funnel for 8-12 level 0 characters, that shouldn't take more than two hours to finish. It is only two pages long. The first page is a groovy illustrated map, following the current DCC trend. The second page is the adventure itself, with background, descriptions, monster stats, and even a table for totem effects. There is a small handout linked in the adventure, but I won't count that toward the page count. Kevin didn't waste the space, but he didn't cheat either: the text is of readable size and the whitespaces aren't too small either.

The hook is simple: children are having nightmares about a strange lady, and the villagers suffer some property damage by fire, so they organize a party to track down the smoldering trails leading to the bogs. At the end of their journey they find to a mound where a troll witch was burned and sealed a year ago. Naturally, the entrance is wide open now.

The background already sets a grim folkloric vibe for the adventure. Kevin does a great job with invoking a strong imagery of the scorched mound too, thanks to his effective use of adjectives. I'm not sure why, but reading the module reminded me of The 13th Warrior.

There are four areas in the adventure, although the root tunnels are broken up into three sections. Immediately after the entrance the PCs will find themselves in a creepy chamber, where the fenghor is lurking in a dark pool. It's an undead crocodile who will release giant mosquitoes from its ribcage once taken enough damage. In the tunnels the players can find exploding gas pockets that can wipe out a careless party, and shelves full of totems with various baleful or beneficent effects. If the characters survived all these atrocities they will finally meet the lair of the hag. It's one hell of an encounter in the middle of an oil pool, against a witch who can ignite anything with her touch, and throw players into the burning oil without effort. Stop, drop, and roll won't help here! After surviving all the horrors of the mound pursuing the man responsible for this mess will feel relaxing.

Before the adventure was published I was asked by the author to review the playtest. My feedback wasn't much different than the current review: while I did point out a few small issues, the adventure was already a well written and polished piece. I hope we'll see more from Kevin soon, he has a good chance to earn a seat in the Valhalla of the best DCC writers. He is a good writer and illustrator. Oh, and before I forget: this module is free.