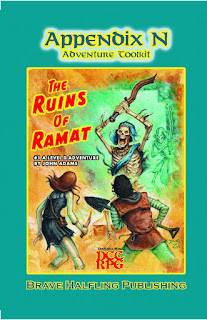 Brave Halfling Publishing's Appendix N Adventures Toolkit was among the first 3pp product lines announced for DCC RPG. It's probably the most infamous too: after a successful Kickstarter campaign in 2012 it still didn't deliver everything that was promised. I'm not sure whether John Adams is just an unlucky guy who bit more than he could chew, or some scam artist who desired to earn some quick buck on DCC RPG's succes. He did deliver me a Delving Deeper boxed set and the first shipment of ANAT modules (heck, I actually got it twice with a year difference!), he did help quickly whenever I asked him for something, but there is still a lot of stuff I paid for missing. This won't hold me back from reviewing what I've already received, and neither will it influence my opinion on the products. In this series I will review the adventures one by one, and the add-ons in a single post in the end.

The Ruins of Ramat is a character funnel for DCC RPG. The print version is a digest sized booklet, which comes with a detachable cover, cardstock handouts, and an alternative level 3 version of the adventure. These are all parts of the pdf version too. The quality of the print product is top notch. The booklets seem sturdy and they look beatiful. Doug Kovacs made a fine cover, while Mark Allen did some cool handouts, and amazing map that imitates the style of the current DCC adventure maps. The print version has a bit more art (one by Steve Zieser, the rest by Mark Allen), but it lacks the end of the player introduction in both copies I own.

The module starts with two pages of background about how a cleric from a different sect compromised and destroyed a militant order of Ramat  from within. That's two pages wasted because the players won't learn anything about it, and likely won't care either. There is a section that highlights the features of the adventure, which is unnecessary for such a short module. Next is the player introduction, with one of the lamest hooks I've ever seen. A bunch of villagers learn from a crying girl that her dog was pulled down to some dark hole by a giant clawed monster. Risking your life to return a probably dead animal to a nameless NPC is everything but a tempting reason to go on an adventure. If you want a good hook for character funnel take a look at The Meat Grinder or Sailors on the Starless Sea! The former throws the PCs right in the middle of a massacre and makes the players thirst for vengeance, while the latter operates with kidnapped beloved ones and some rumors of great treasure. Much better!

The dungeon starts great! There are slippery stairs and a hungry spider right at the entrance. It doesn't matter if someone dies by breaking his neck, or being snatched away by the spider, it will be hilarious anyway. Once down the players can go three ways. This will be a random choice since they don't know anything about the place. The problem is that only one of those choices will result in a meaningful adventure. Going right they can explore most of the dungeon, have some battles, and get all the loot the place has to offer. Going forward they will run into some meaningless encounters with giant bats and meet a dead end. Going left their adventure will end early - either because they die in the trap, or because they find the dog and decide to end their quest.

Do you love all the crazy and weird stuff of DCC RPG? If your answer is yes, then you will be disappointed, because the rest of the adventure is unimaginative. There are 17 rooms in total, but most of these are far from memorable. There is nothing "Appendix N" about the adventure. What truly saddens me is that an extra sentence or two would have had been enough to make it raise above mediocricity!

For example, there is a cell with lawful aura where the chaotic PCs feel uneasy, the rest heal better, get a bonus to saving throws, and have a vision of Marpu, a former cleric. The healing bonus is useless for funnel characters, unless the Judge allows the bonus to natural healing too. Even then it's only marginally useful because level zeroes usually die by a hit. The saving throw bonus is useless because it's only available in the 10 x 10 feet cell. They can't even take a battle there! The vision is useless too, it only refers to an optional adventure. It doesn't even give a hint about what happened here. Did I mention there is no description about the room at all? You get a single sentece about the door being okay. Well thank you very much, it's a huge relief that I don't have to waste my imagination to describe a plain wooden door! The text is full of one sentence long descriptions without any substantial information.

This is where I started making notes on the margin. The room got some nice furniture (rather unusual and striking in a moldy dungeon), and a large tub of odorous hot water. Looking into the water long enough made Marpu's vision appear on its surface. He would answer a few questions before disappearing. I think there was a pallet too that could resurrect a single character laid on it. There were seven more empty cells on the corridor. I made one of them the spider's nest with the remains of earlier victims, and put a pile of coins in another that would turn into a golem when harassed. I could go on what I changed on the armory, library, chapel, dining room to make them a bit more interesting.

The monsters are generic too. There is a giant spider, some bats, some skeletons, an undead cleric, and a black tentacle demon that can't leave the sanctuary. At least the demon is powerful: it has an instant death attack and requires a unique way to defeat it. The level 3 version is much better in this regard: it adds flying demons, an engulfing psychic ooze, a few skeleton acolytes witch charm spell to the mix, and a bit more of everything else. Putting these into the funnel (in smaller numbers of course) would improve the adventure a lot.

Surprise! The treasure isn't that attracting either... There is a ring that works as a lantern for an hour, a few healing potions, a light golden chainmail, some junk weapons, and a chest of gold near the end. There is a cursed shield that's simply there to mess with players: it turns to dust on touch and gives a -1d on attack rolls. No foreboding, not a single sign of danger, it isn't too good to be true either. It's just a simple bronze shield that will mess with you. There is also a minor artifact among the loot, the Spear of Ramat! There are murals depicting it slaughtering demons with its holy light. Sounds fun, doesn't it? Well gues what, it's just a McGuffin. It has no stats, because its special abilities only function for a cleric of Ramat. Once taken it will force its will upon the PC and make him dispatch the demon mentioned above, essentially finishing the adventure. Once a demon is gone an angelic being appears and takes the spear. Well, at least you can keep the 500 gold... Did I mention that the loot in the level 3 version is exactly the same as in the original module? The only difference I discovered in loot is the lack of the cursed shield.

The adventure ends with an appendix that proposes two optional adventure ideas in a few sentences: one is a trip to the underworld realm of psionic lizardmen, and the other is a quest for becoming a cleric of Ramat. These are actually cool sounding adventure opportunities, which aren't planned to be released. Shame.

While there are hints of egyptian theme (just look at the cover), it's unfortunately not emphasized in the scenery. No typical egyptian elements like ankhs, scarabs, hieroglyphs. They could've helped in giving the adventure some character, which it painfully lacks. Instead of a black tentacle demon how about one with crocodile head that spits deadly slime globs? Instead of a generic ten feet deep pit how about one with scorpions? The point of adventure modules is reducing preparation time and inspiring the Judge. Unfortunately The Ruins of Ramat doesn't help much. The module looks gorgeous, the map is amazing, it also has some potential, but it's up to the Judge to create something good from the bare bones he paid for. If you are willing to finish someone else's job you can start it by adding a giant clawed monster mentioned in the hook, because the writer fucking forgot about it.

Tl;dr: The Ruins of Ramat has stunning illustrations, forgettable content, and lazy writing. You can buy it on DriveThruRPG.

Disclaimer: The DriveThruRPG links on this site are affiliate links. If you buy something through the link we'll get some credit for your purchase too.
Bejegyezte: Tamás Illés dátum: 23:47 No comments:

Wow, I haven't posted anything in a month. Sorry for the hiatus, but in my free time I was busy playing Doom. It's been a while since I was so captivated with a video game - and it's not even an rpg! Years ago I have given up on first person shooters because I didn't like the gameplay and level design of modern shooters. While there were some old-school games like Rise of the Triad, Shadow Warrior, I still had more fun with returning to Quake here and there to check out a few mods. Playing Doom was amazing, especially after I felt how my long regressed shooting skills were improving again.

Since I have finished the game it's time to start taking care of other duties and hobbies again. Stay tuned for more!
Bejegyezte: Tamás Illés dátum: 09:48 No comments: