Not to be mistaken with the unfortonately named Judges Guild classic Glory Hole Dwarven Mines, Dwarven Glory is the second Wee Warriors Dungeon Master Kit originally released in 1977. The module got a facelift when Pacesetter Games reprinted it in 2013 with an additional AD&D rewrite included.

V3 Dwarven Glory is 44 pages long, with color covers, and black and white interior. Visually the book is quite a disappointment. My biggest gripe is the cover - I have absolutely no idea why the excellent original illustration was replaced with something that looks like a cheap caricature of it. It's not only a downgrade aesthetically, but also feels disrespectful. The obvious answer would be for legal reasons, but as far as I know Pacesetter did reprint the book with the original cover before. My other issue is the obsession with the Vampire Queen. She is on the back cover of the book, on the first page, and she is glaring at me with her smug face from every page header. I know Palace of the Vampire Queen was a huge milestone and the first kit in the series, but she has absolutely nothing to do with Dwarven Glory - it's only good to mislead customers and hurt the module's identity. Let's give her a rest, shall we? Otherwise there are barely any illustrations within other than the maps, and those few pieces range between okay and meh.

The adventure takes us into the semmi-abandoned dwarven caverns within the mountain chain on the island of Baylor. The background  is summed up in less than a half page: the once thriving dwarven community was besieged and conquered by Mortoc and his 10 Orc Tribes, but there are still rooms they didn't penetrate, and survivors they didn't slaughter. It's a great setup, not only because it goes against the usual cliché of dwarves digging too deep, but because it also promises opposing factions - one of the cornerstones of turning your dungeon into a dynamic environment.

The caverns have 7 sections and 64 keyed rooms. Their presentation is unusal: the maps use hexes instead of squares, they are marked by letters ranging from B to G instead of numbers (curiously, there is no A), and there is no set order to them, although the introduction offers a sequence for beginners, and another for medium strength parties. The maps can be connected through their north and south ends, resulting in a long tunnel of thematic segments instead of the classic vertically aligned set of levels. Each section has branches and loops of their own, but due to their small size they don't make a meaningful difference in the exploration's overall flow.

The room descriptions in Dwarven Glory are a huge step forward compared to PotVQ. Each section has a theme outlined in one or two sentences, followed by terse summaries of the room entries which deliver more information than the predecessor's tables ever managed to. Of course the new approach is far from perfect: the entries often turn into a laundry lists of trivial objects, some of the details are unnecessary, and there is zero highlighting. Still, it's an improvement!

While it had a minimilastic presentation, PotVQ packed quite a punch with its varied and imaginative entries. The caverns of Dwarven Glory follow suite as its parts get introduced from the once busy cities entrance, through its monster-infested mines, to a desecrated temple of heretic stunties. The environment is the least interesting part of the module though: it's the NPCs where Dwarven Glory really shines. They have interesting relationships with each other, they have their own goals, and are mostly shameless opportunists who will try to take advantage of the adventurers. Some highlights include the thieves in the first tavern who want to poison and loot the party, pixies who blatantly lie about the magical properties of the clothes they sell, an ogre chess player who is a sour loser, heretics who summoned the Elenoin (see a Gods, Demi-gods, and Heroes or Deities & Demigods with the melnibonéan pantheon in it) to assassinate their own high priest, and so on.

My absolute favorite is the mess in Section F. There is a minotaur who will put a geas on the party to recover his son, two ogres in the neighbourhood who hate him, the minotaur's lost son with a gem of insanity around his neck on his way to kill the ogres, twenty ghouls working for the minotaur, ten lizardmen on friendly terms with the minotaur and a cave troll (to whom they will try to lure the party the bastards they are), and a lich who will put a geas on the visitors to recover the young minotaur's head. It's fucking brilliant. Shit like this is what make a dungeon come alive. When the players arrive the whole level is in the middle of a chain of events that unless stopped will make the place explode in a wave of violence. There is so much opportunity to roleplay and get slaughtered it's amazing. It makes me even forgive the relative small size and simple design of the level.

The loot is nothing extraordinary, but at least it's varied. The upper levels offer mostly gold and mundane valuables, but as further one ventures gems, magic items, and magic gems become more common. The module rewards exploration with some ludicrously precious hidden treasure, while other times it punishes with traps and cursed items. Needless to say, the descriptions of traps and new magic items is vague. A chest has a 6-hex chlorine gas trap on it. What does it do? No clue. Probably save or die, but at least you get a book that tells you the value of gems, which is nice.

Dwarven Glory's tone feels more lighthearted than PotVQ's, mostly because it lacks gory and disturbing scenes - no children drained dry or grinded into blood pudding this time. It has plenty of old-school quirkiness and humor, even some juvenile, like the former night club with posters of dwarven go-go-dancers, or the two bookcases of X-rated materials in the dwarven high priest's chambers. That wasn't meant to be criticism - I leave a healthy amount of naughty magazines and kinky statues in my adventures too for the sake of immersion and verisimilitude.

The AD&D version pisses me off even more than PotVQ's. Dozens of rooms were replaced with empty holes, encounters were watered down, the eccentric elements were mostly thrown out the window. The conversion strips down the charm of the original module and sacrifices cool roleplaying opportunities in favor of run-of-the-mill encounters. The only good idea is the extra detail the heretics receive: they are deviants who want to live in forests with elves, which is actually an idea fitting to the spirit of the original.

This time it's a no-brainer which version to choose if you want to run the adventure. The conversion is just deadweight to the original edition - it adds nothing of value while increasing the page count. Dwarven Glory is by no means a masterpiece, but it is a good module and an interesting historical curiosity, with some qualities many modern adventures should envy and take note of.

Where to find it: You can find the module in print and pdf in the Pacesetter Games & Simulations webshop. Some of their modules are alse available on DriveThruRPG in pdf, so I wouldn't be surprised if the above mentioned three would surface there in the near future.

Other parts of the series:
Part I: Palace of the Vampire Queen
Part III: The Misty Isles

Disclaimer: The DriveThruRPG links on this site are affiliate links. If you buy something through the link we'll get some credit for your purchase too.
Bejegyezte: Tamás Illés dátum: 01:51 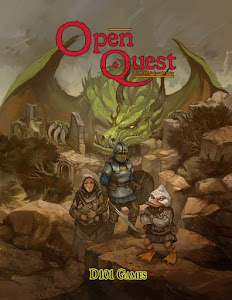