May went by so fast I didn't even notice there was one. Yesterday I sat down to write a review, but after an hour or two I scrapped it entirely, because it felt like doing homework. Hobbies should be fun, and if something feels like a chore, you should give it a rest. Thus instead of a review, house rules, or whatever, I will give a little status update about what I actually did in the last month, and what I'm going to do in the near future.

Hecatomb is crawling forward nicely. I'm at 24 breezy pages that cover character creation, game system, spells, equipment, basically everything players would need, though spells are currently undergoing major revision. While my original intent was a homage to the original Basic Role-Playing and Magic World, my manuscript inevitably began to divert more and more from its roots. As the rules began to take shape, so did a sword & sorcery setting, which over time began to affect the rules it has grown out of. I will write a more detailed retrospective around the 6th month milestone.

Despite dropping or pausing some campaigns during the quarantine I still have two of them running. One is my old D&D5 Wilderlands of High Fantasy campaign's B party, which will end soon - though I've been telling this my players for a year or two by now. The party finally found what they have been looking for at the bottom of Fortress Badabaskor, just destroyed Blackrazor using Whelm, and are now enjoying an otherworldly landscape on a demonic plane. Will they defeat the demon that inhabited the sword on home ground? Will they return to the Wilderlands and take over Fortress Badabaskor? Will the half-orc barbarian who was turned into an antagonist by the sword survive and recover his player character status? We'll see on Thursday.

The other is the usual OSE Eremus campaign. After murdering some sirens and scalping them to get new strings for a dark elf vampire's lyre the party did a hexcrawl back to the ruined baths hiding the entrance to the Underworld. Their journey was mostly uneventful until they ran into a ruined tower infested with cycoyles, who they awakened and almost died fighting. Now they are back in the Underworld, trying to commit genocide against a spider-worshipping kobold tribe. That will be Wednesday's entertainment. "That's all nice and dandy, but what the hell is a cycoyle?" I'm glad you asked! It's just a slightly reskinned gargoyle, but it was altered enough that my players had no clue what they were fighting. Still, here is your stat block:

Cycoyles look like stone eggs with bow legs, gangly arms, small wings, and a crooked horn. From the middle of their rotund body a huge red eye is glaring evilly. They disguise themselves as grotesque statues near ruins and prey on weary wanderers who take a rest among the rubble.
AC 5 [14], HD 4 (18hp), Att 2 × claw (1d3), 1 × bite (1d6), 1 × horn (1d4) or cursing eye beam, THAC0 16 [+3], MV 90’ (30’) / 150’ (50’) flying, SV D8 W9 P10 B10 S12 (8), ML 11, AL Chaotic, XP 125, NA 1d6 (2d4), TT C
▶ Ambushers: They wait for the prey to fall asleep.
▶ Blend in with stone: May be overlooked or mistaken for inanimate statues.
▶ Eggs: 50% chance for a pair to have a rocky egg worth 100 gp.
▶ Mundane damage immunity: Can only be harmed by magical attacks.
▶ Spell immunity: Unaffected by sleep or charm spells.
▶ Cursing eye beam: Can place a curse on a character once a week with a shimmering red eye beam. Save versus spells or be afflicted by a curse of the referee’s choosing. (Maximum possible effects: –2 penalty to saves, –4 penalty to hit, an ability score reduced by 50%.)After some pause I did a surprising amount of miniature painting, preparing for a Warhammer Fantasy Roleplay 4e campaign that I ended up putting on hold. Now all those primed beastmen, greenskin, skaven, and renaissance townspeople were pushed to the bottom of my backlog, and instead of them I started working on some ancient miniatures, hoping I can use them for Hecatomb. I just received a package from Lucid Eye Publications today, containing some amazing miniatures from their Ziggurat line, a bunch of Death Dealers for a friend, and a Conann of the Fianna figure from their Jim Fitzpatrick line for my better half, which is both surprisingly big and amazingly detailed.

Speaking of other halves, our first child is expected to arrive early July. It's a wonderful new adventure into the unknown, one that's both exciting like nothing else before, and because of that, also slightly terrifying. Fingers crossed my experience with "winging it" and "herding cats" will come handy on our journey. This also means I will probably have even less free time, so don't be surprised if I'm gone for a month or two without posting anything.

Before that would happen I have two things I would like to cross out on my bucket list. One morning while it was still dark I opened my blog on my phone and was blinded by the light. Thus I will move to a dark theme, though that will require some minimal tinkering with the CSS for the info boxes. The other is a review. Emperors Choice's storefront unexpectedly resurfaced a few weeks ago on DriveThruRPG, which is the perfect occasion to finally write a review about their Arduin Grimoire Trilogy. It won't be an easy task though, for I will have to find a fine balance between being grateful and pissed off.

That's all for now. Fight On!

Disclaimer: The DriveThruRPG links on this site are affiliate links. If you buy something through the link we'll get some credit for your purchase too. 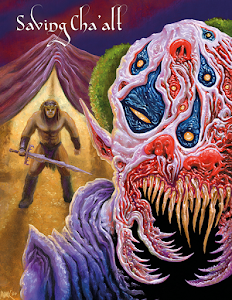